We've been to Asbestos Point before, nothing much has changed except for the road which was a bit rougher than we remembered it. The trail is a great one for four-wheeling and since we were all in Jeeps, that's exactly what we did. It's a long, slow, arduous, rocky climb but we all made it to the top of the mountain without much hazard except for a punctured tire sidewall one of the Jeeps had.
Asbestos Point is known locally as Angel Wing because of the pattern made by the Asbestos slag on the mountainside, from a distance it resembles a pair of Angel's wings.
During WWII, the Zimmerman claims of Asbestos Point supplied high grade asbestos to the military, nothing much has been done in the area since that time. It's a beautiful area in the Sierra Ancha Mountains bordering the Sierra Ancha Wilderness in Gila County. The sweeping views are spectacular with Roosevelt Lake in the distance including Roosevelt Dam and bridge.
We ventured into one of the mines. It seems flies have taken up residence for the Winter months, the walls were thick with them, they buzzed all around us as we disturbed their Winter naps. Not much remains of the original mining operation except for the mines themselves, a few pieces of rusting equipment and the remnants of a few buildings scattered around the mountaintop.
It was a great trip, fabulous weather added to the enjoyment ... a good time was had by all. 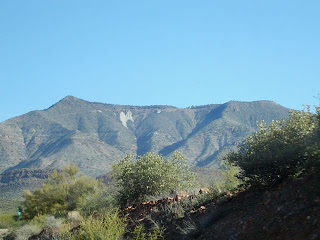 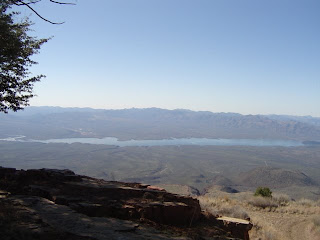 There appears to be some Azurite in
veins alongside the Asbestos here. 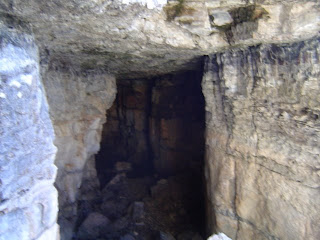 The timbers here once supported the ceiling of the mine...Oops! 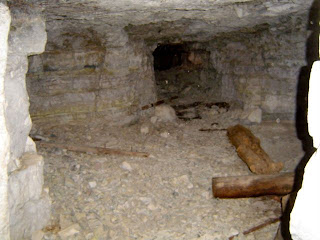 A rusting piece of equipment has been picked clean
by scavengers. 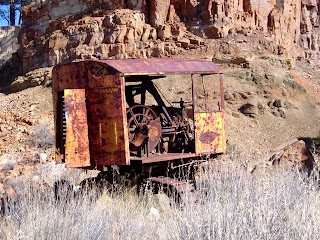