FR97 to FR262 Skirting The Wilderness

We headed out this morning to cover an area we had previously seen, but never attempted before. We've spotted the trail on several occasions when we were exploring the Jack Shoe Ranch and Sunset Mine area just below the Salome Wilderness.
The trail meandered out among the low scrub, hills surrounded us. To the North we could see we were as close to the Salome Wilderness as a vehicle could possibly go. The scenery got better and better the farther in we went. The trail began to get rocky and extremely bumpy, Jean and I both felt like we had shaken baby syndrome as we held our heads to keep them from snapping back and forth but the views and scenery more than made up for the bit of discomfort we felt as we crossed the worst of the rocky areas. The road climbed gradually as we headed up into the hills soon we were in the midst of Junipers and Manzanita, beautiful rock formations dotted the scenery. Eventually the road we were on ran out and we were forced to turn around but we could see a trail heading down into a deep ravine and up the mountain on the other side, but, that's a challenge we'll have to save for another day.
The weatherman says there's some heavy rain headed our way, so we're glad to have gotten some good Jeeping in before bad weather moved in and the trails once again became impassable. 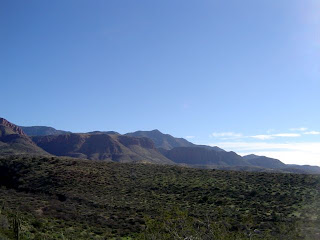 Mr Mule & Ms Horse are usually seen in this area 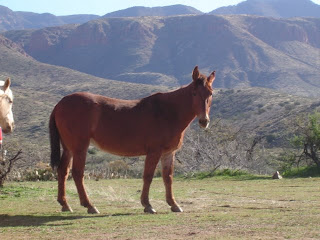 Here's the rocky trail. Roosevelt Lake is
ever-present in the distance 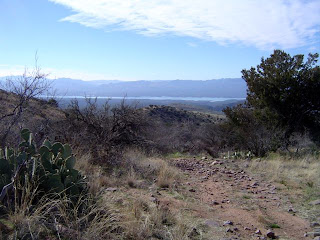 The mountains of the Salome Wilderness to our North. 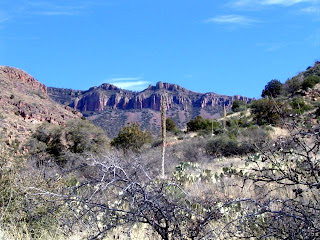 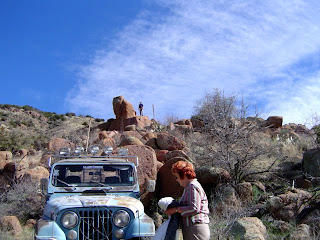