Roosevelt Dam, Then And Now

Roosevelt Dam was the brainchild of President Theodore Roosevelt who had the foresight to envision widening the Salt River and damming it to create Roosevelt Lake. Prior to completing a chain of lakes along the Salt River, Phoenix would periodically suffer from flooding during the winter and monsoon rains in the summer and then severe draughts during the hot summer months. Roosevelt Dam was completed in 1911 at which time it was dedicated by Teddy Roosevelt. At the dedication ceremony he said "If there could be any monument which would appeal to any man, surely this is it. You could not have done anything which would have pleased and touched me more than to name this great dam, this reservoir site, after me, and I thank you from my heart for having done so... "
During an extra heavy period of rainfall in 1993, it was determined that the dam wouldn't be able to handle a heavier rainfall, so an addition was made at that time adding an additional 77 feet to the height of the dam. The work was completed in 1995.
We drove to the dam today. SRP (Salt River Project) is releasing water slowly at the dam now that the lake is at capacity. The floodgates aren't opened but water can be seen flowing through pipes at the bottom of the dam.

Roosevelt Dam shortly after completion in 1911 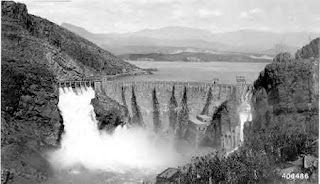 This is some of the heavy equipment that was used to
build the addition of the dam. It's stored on private
property now, we've been told that the current owner will
probably eventually sell it off for scrap. 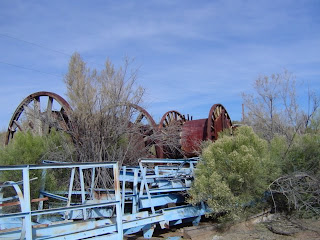 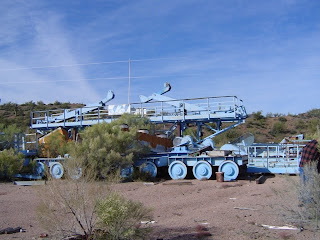 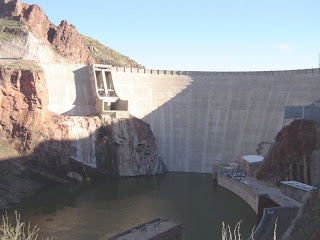 This site has some interesting history and photos of Roosevelt Dam
Bureau of Reclamation: Lower Colorado Region