Webster's says;
Main Entry: desert
Pronunciation: de-z-rt
Function: noun
Results
1. arid land with usually sparse vegetation especially such land having a very warm climate and receiving less than 25 centimeters (10 inches) of sporadic rainfall annually.
b. an area of water apparently devoid of life
2. wild uninhabited and uncultivated tract
3. desolate or forbidding area
Holy smoke! We've had about five straight days of steady rain here, it sure doesn't fit the definition of "desert" we find in the dictionary.
Gila County Sheriff's deputies were going door to door out here, warning people that evacuation might be eminent due to the potential of heavy flooding in our area. It was a wild week, the rain didn't stop except for a brief time yesterday when the sun broke through just long enough to show us that it was still up there where it belongs. We were lucky to escape relatively unscathed, happily evacuation wasn't necessary, although we did have the Jeep loaded with things we might need to survive a few days away from home. There were times we did get a bit nervous, particularly when the "dry" wash behind our house began to flow like a small river, we've never seen water in it before. Pinto Creek, the larger wash near us is roaring along the way to the lake along with every other formerly dry wash and riverbed in the area.
We've had more rain in five days than Arizona normally gets in an entire year. The mountains have gotten record breaking snows in some areas and even some ski resorts are closed because there's too much snow!
Growlph, our picky little Schnauzer has to be forced to go outside, he despises getting his paws wet, the poor little guy prefers to hold his business rather than risk getting wet. He's been wet and dry so many times, we're sure he's going to mildew if the rain doesn't stop soon. Ah, there's nothing quite like the essence of a wet dog. (Eau de Schnauzer?)
Our electricity was out for a few hours on and off during the week and yesterday, we had no phone service outside of our small calling area..no internet...Egads! We managed to stay snug, dry and warm in front of our wood stove so all in all, we have no real complaints.
Many major roads are closed for various weather related reasons including some interstate highways in the northern part of the state. The Forest Service has closed quite a few back roads due to unsafe conditions. Anyhoo, it looks like our Jeeping may be put on hold at least for a while until the trails have dried out a bit.
The entire state has had its share of something, flooding, dust storms, hail, sleet, freezing rain, wind, blizzards, snow.... we can't help but wonder what's coming next...locusts? pestilence? famine?
****
Here are some pictures we took this morning between the raindrops, it sure doesn't look deserty to us! 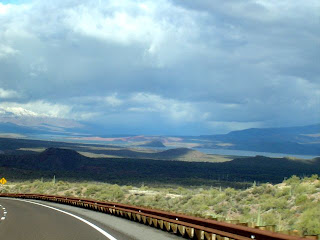 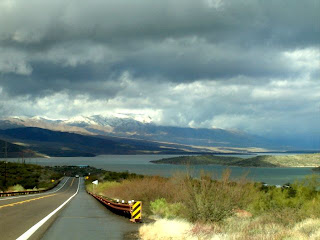 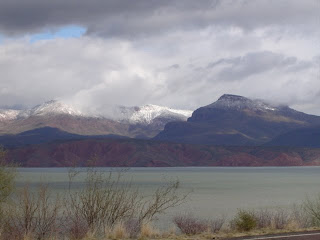 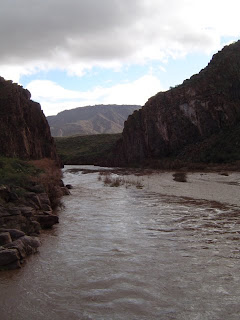 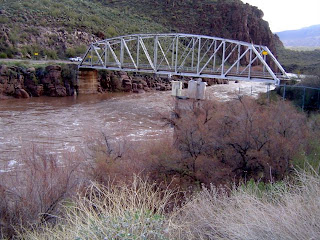 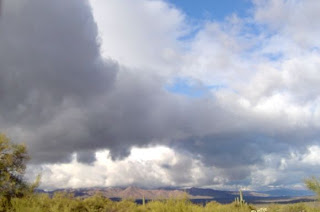 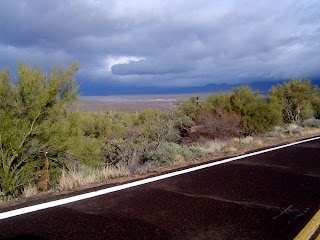 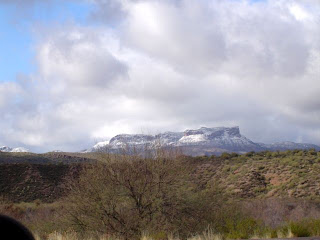