We headed out with no particular destination in mind except to explore some of the areas in the Pinal Mountains, south of the town of Globe. The Pinals offer a range of vastly differing scenery ranging from lush pine and Manazanita forests to desert plateaus thick with barrel cacti, creosote bushes and scrub. Altitudes were mostly high, some close to 8000 feet, offering gorgeous, sweeping views of the mountains surrounding us.

The roads were fairly good with the very notable exception of the trail leading from Pioneer Basin up to Pioneer Pass. We've always been told that this trail in particular could be a problem, especially in bad weather. Fortunately, the day was clear and sunny and the trail was dry. After taking a long, bumpy trail we came upon a house and an old mining camp. The lone resident, a "different" fellow, a true hermit lived there with only the company of his dog, many miles away from the nearest civilization. Bruce stopped to chat with him and ask about the road conditions ahead. I don't know what was said but just past his place the trail turned ugly. We had to make the choice of attempting it or turning back from whence we came. We decided to attempt it. Since we drive a mostly "stock" Jeep while the other three are built more for this kind of terrain, we were a bit concerned about whether we could make it through without any carnage to our Jeep, but our worries proved to be unfounded. Ralph's Jeep driving experience served him well, we made it through with only a relatively few groans, stiffled screams and gasps from me....good job Ralph!

It was nice meeting new people and making new friends with the same interests as ours'...to enjoy the scenic beauty the backroads of Arizona has to offer to fellow Jeepers.

Ready to hit the trail 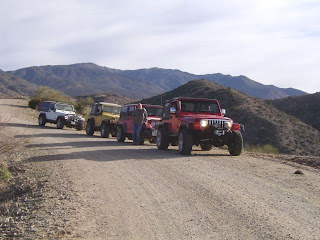 There's the road far below 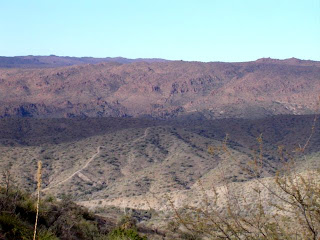 Sweeping views of the Pinals 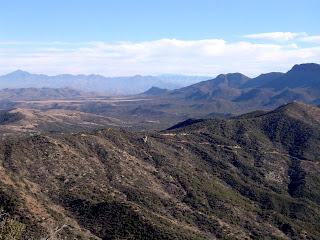 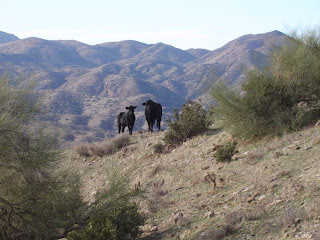 Challenging to( say the least) 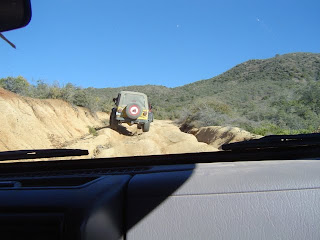 NOT a road well traveled! 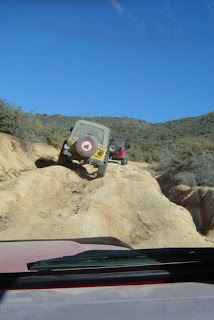 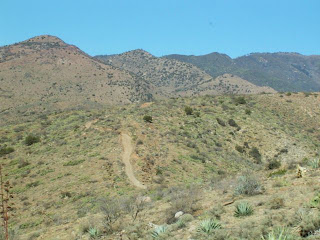 We were rewarded with this spectacular view 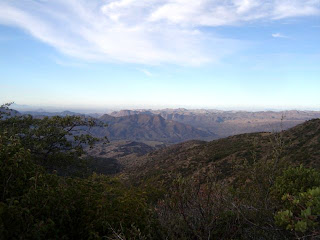