It's a beautiful day today, clear, cool and sunny. We decided to take a ride to an area we've passed before but never had driven through. It's a big circular route leaving from Globe and heading down to Superior and then across to Winkleman and back up to Globe. It's all paved highway, no backroading today.... about 90+ miles or so.
We've read about the Ray Mine being the second largest open pit copper mine in the state and wanted to see it first hand. Wow, what a gruesomely awesome sight it is! Huge doesn't begin to describe it, the photos can't show the true enormity and scope of the operation. Although we don't consider ourselves to be "tree huggers" or extreme environmentalists, we can't help but ponder what impact such an undertaking has on the environment, even the signs at the scenic overlook at the mine tell about sulfuric acid being used in the processing of copper ore. We watched as giant dump trucks crept back and forth dumping load afer load of mine tailings, leaving concentric mountains in place of the ones Mother Nature had previously put there. Yep, the world needs copper, lots of it and it's got to be mined somewhere...but.......sigh 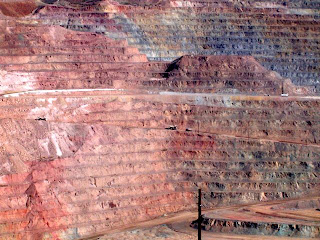 A huge shovel and a $20,000 truck tire. (so the sign said) and a frustrated Schnauzer who wanted to piddle on the truck tire but couldn't because it was fenced off. 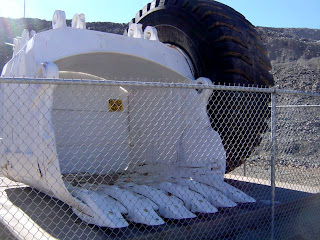 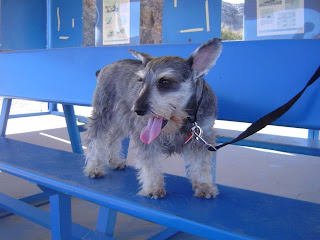 Mother Nature didn't intend for mountains to look like these 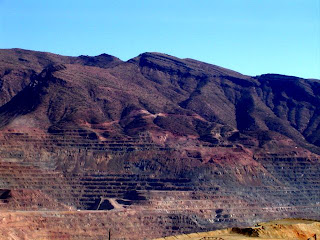 Thousands of feet deep into the open pit 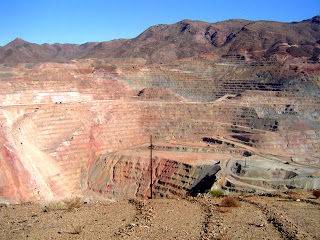 Lots of copper is being hauled from this site 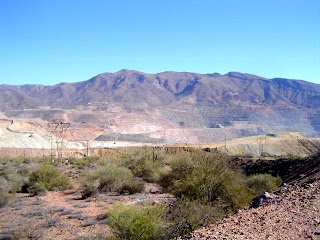