We decided to head for the former town of McMillenville yesterday. Back in the 1800s McMillenville was a fairly large silver mining town, it even had a post office, established in November, 1877 until October, 1882. Nowadays, not much remains of its former glory.
During the town's heyday it was subjected to a major, brutal Apache raid. It seems that the area was once part of land designated by the government to be part of the Apache reservation. Then, silver was discovered there by a pair of wandering prospectors, Charlie McMillen and Theodore Harris, March 6, 1876. It wasn't long after that the government decided to "resurvey" the reservation, low and behold the government determined that the land containing the rich silver strike wasn't part of the reservation afterall... hmmm mighty suspicious, (seems typical of government activity but that thought is for another post and probably not appropriate here...okay Laura, step away from that soapbox!) anyway, it's a small wonder the Apaches were angry.
In Nell Murbarger's wonderful book, "Ghosts Of The Adobe Walls", Nell describes the town as she found it back in 1950. There were still adobe ruins of old miner's cabins present but even then, not much remained of the town. The original main mine, the Stonewall Jackson is now located on private property, the rest of what remains is on Tonto National Forest land.
We found outlines of old buildings, some Indian ruins along with the old tin cans that can usually be found at this kind of site. We even found a shard of Indian pottery laying near an eroded wash.
Although little remains of the ghost town of McMillenville, we stood amid the ruins with Nell Murbarger's words echoing in our ears, " I left the old town of McMillen to its gray adobe ruins, its small gray lizards....and the gray ghosts of its departed dreams."

barely the outline of an old adobe cabin 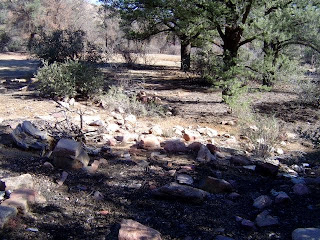 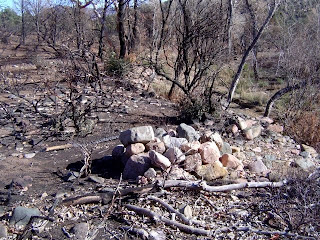 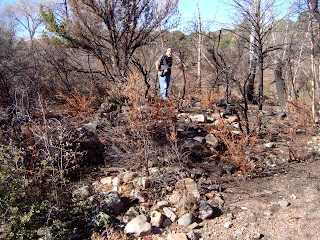 after McMillenville we checked out FR 584, oops the road ends here 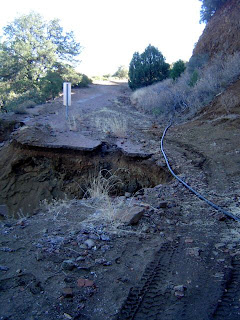 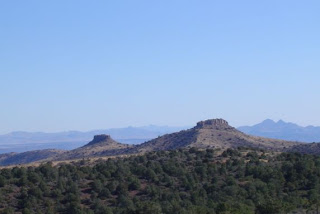