The downside of rural life

Sorry we haven't been posting much lately, we've taken some time out from the trails to do some well-procrastinated work here at home, but, hopefully, we'll hit the trails again soon, we're both going through trail withdrawal.
There's a downside to living in the boondocks, this morning's events showed it all to clearly. We couldn't sleep, so at around 2:30 AM we were sitting in the den in front of a cozy fire, having our morning coffee when suddenly, we were shaken by a loud boom, minutes later a second, even louder BOOM rattled the entire house. At first, we thought it was just an electrical transformer until we looked outside and saw the mobile home down the road, fully engulfed in flames. We tried to phone 911, the line was busy, probably from other people reporting the same fire. Ralph ran down the road to see if there was anyone who needed help, but by the time he got there, the place was obviously a total loss. The volunteer fire department took at least 45 minutes to arrive on the scene and when they did finally arrive, two more houses were burning. The pumper truck ran out of water quickly, when another pumper truck arrived, the pump wasn't working. Finally enough tanker trucks arrived, but by the time they were able to put some more water on the multi fires, it was too late, all three places were a total loss. From what we've been told, the fire was started by an electric heater igniting an elderly man's oxygen. The first boom was a small portable tank, the second boom, was a large oxygen tank. Luckily, nobody was injured, but it looks like the elderly man's dog was killed in the fire. Very sad. The only house that was occupied at the time was the one belonging to the elderly man, the others were vacation, weekend homes.
We take our chances to live the rural "quiet life", events like these tend to show us just how risky the chances can be, but all in all, people living in the peace and solitude of life in the boondocks, wouldn't change a thing, us included. 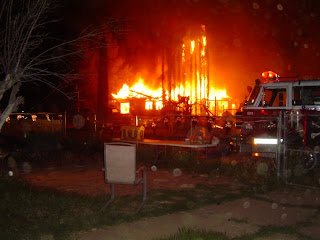 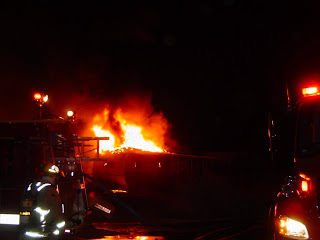 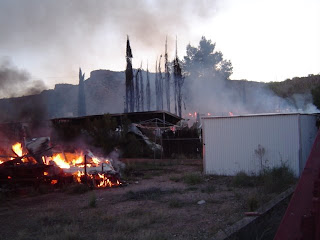 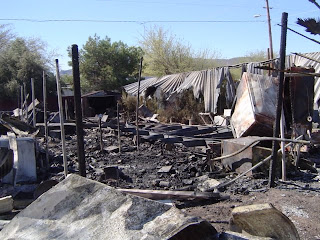 This is why we take the risks 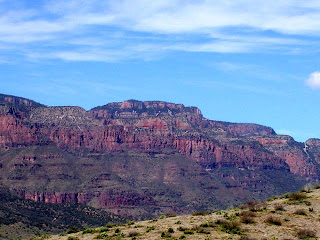