We headed out early this morning with Jean & Larry to check out a trail we've seen but never tried to follow. It's located just a few miles from our house, in an area overlooking Roosevelt Lake. We were hoping it would be a through road, although it's an unnumbered trail and doesn't show on the Forest Service maps. We put the Jeeps through their paces as we climbed steadily uphill. The road was off camber in places, rocky and rutted, but nothing the Jeeps couldn't handle. Unfortunately, the road wasn't a through road, ending just before the top of another mountain ahead. It was well worth the ride anyway, the scenery alone was breathtaking, added to by the wildflowers in bloom all over the mountainsides. After leaving there we headed down the trail to the Oak Flat Trailhead, a nice ride that took us across a couple of scenic creeks. We stopped there for a while just to chat and enjoy the scenery and cool breezes.
On the way home, the trail was blocked by a small Western Diamondback stretched out across the middle of the road, sunning himself. He refused to move so we tried to drive around him. He decided he didn't like being disturbed and crawled under the Jeep. Hmmm not knowing exactly where he was or how angry he might be, we decided to NOT get out of the Jeep to check. Ralph pulled the Jeep slowly forward so as not to run him over....Oops, he ran over his rattles. Needless to say, the snake was a little more than a bit perturbed as the Jeep parked on his tail. He repeatedly struck a the Jeep's tires, of course being such a small rattler, he didn't manage to sink his fangs in. Ralph rolled forward a bit and after giving his rattles a good shake, he slithered off, no worse for wear.
Nice ride, although our friend, the snake might say otherwise.

Looking down on the Jeeps from the mountain
high above 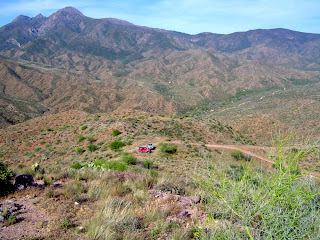 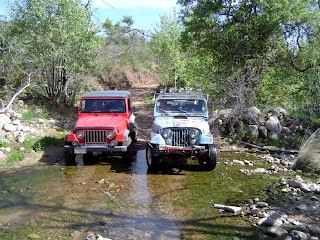 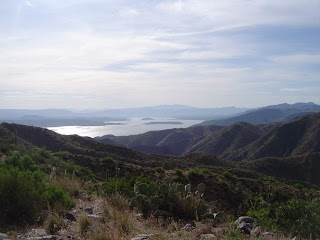 Spectacular scenery along the trail 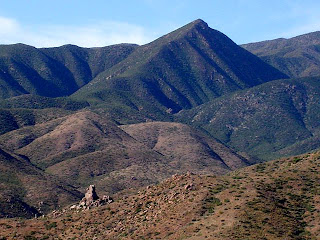 These "crowned" or "crested" Saguaros are rather rare.
It's not known what causes them to crest on the top,
it's speculated that it's caused by a genetic mutation. 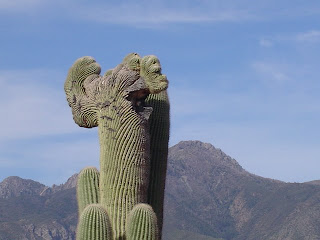 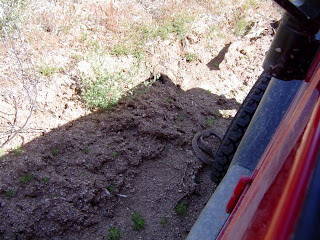