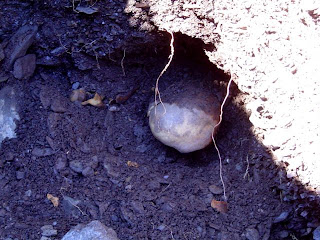 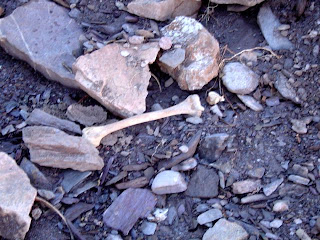 Well, where do I begin? This was certainly a different kind of adventure for us, to say the least. We took off this morning to see if we could locate the remains of an old mill and from there, speculate on the location of a ghost town in that vicinity that we've heard about. We knew the location of the spot where the mill was, there doesn't appear to be much left of it, most has been washed away during heavy flooding. We decided to take the trail less traveled and so on foot we headed past the place where the mill once stood to see if anything had been washed downstream. We came to a large washed out area along Slate Creek so we decided to climb down the embankment and take a look in the riverbed. Standing above the riverbed, we saw a bone. We see a lot of animal bones on our treks, but this looked a bit different. It looked like a human arm bone, aww no, it couldn't be...could it? We began to climb down the muddy embankment and as Ralph was helping me slide down, I glanced to my left, there imbedded in the dirt was something that looked different from anything else around. Upon closer inspection we both decided it sure looked like a human skull. YIKES! Should we go phone someone and report it? Me, being a person who is into details, decided we should poke around a bit. I wanted to be positive it was human remains before we phoned, we would have felt silly if it turned out to be just a buried ball or gourd. Ralph carefully removed some of the dirt from around it, coming to a neck bone and then the shoulder bone...and the lone bone we saw at first was indeed human upon closer inspection. DOUBLE YIKES! Yep, time to go and call authorities. We thought we could wait along the rather busy Beeline Highway and flag down a cop, the road is usually crawling with them. While we were waiting two really nice guys on motorcycles stopped and after explaining to them what we'd found, we asked if they could phone 911 for us. They turned out to be retired cops themselves. They couldn't get a signal on their cell (that's one reason we don't carry one..no signal in the areas we go to) So one of them rode up ahead to see if he could get a signal. After about 20 minutes he returned telling us that authorities were on their way. First DPS (Highway Patrol) came, taking our information and making copies of our driver's licenses...maybe we've been watching COPS too much, but for some reason, we felt uneasy when the officer "ran" our identification. I guess we came up clean, cause our licenses were returned to us. Whew! HA! By this time, Sheriff's Deputies arrived, then a Forensic team, they then phoned for a Tonto National Forest archaeological expert but they were coming a long distance so we couldn't wait because our pooch was home alone waiting for us.

As I'm writing this, all we're left with is a lot of curiosity about the skeleton we found. We don't know if it's recent, ancient or what the circumstances were of the person's demise....and what were they doing buried under so much dirt. We're hoping to be able to find out some more information in a week or so from the authorities involved, I'll post up any details here if we find out more, so be sure to check back.

We'll return to the area again, we think there's still a lost ghost town out there somewhere, next time, perhaps the trip will be a bit less eventful!

A little over five hours later, we're tired, but still buzzing with excitement over our adventure. Who says life in the boondocks is dull?