Wow, it's been a little over a year since we posted anything new in our journal....but...heck....since retiring, not much new has happened (knock on wood).

We've done a bit of Jeeping but most runs have been on previously posted trails, so we didn't want to bore you all with double entries. We've found that one definite advantage to growing older is that we've forgotten the details of trails we've already been on, Jeeping them is like a whole new experience for us.

We've spent a good bit of our time working with our Schnauzer, Growlph. As you may recall, he came from a Schnauzer rescue group and to say he has issues, is putting it mildly. We've both gotten more than a few bites and nibbles from him as we've attempted grooming. He lets us use the scissors but when it comes to the clippers, he's not a big fan of the whirring sound they make...sure wish they made silent clippers for skittish pooches. Trimming his nails requires the use of gloves and a big blanket to wrap him in. We pull one paw from the blanket at a time and hope his face is covered enough to prevent bites. Those are his worst characteristics...all in all, they're things we can live with. On the plus side. he's turned from a distrusting, standoffish dog into a sweet loving creature who wants to be in our laps and loves being petted. We feel like it's quite an accomplishment for us to have won his trust. He now gives sloppy, slurpy Schnauzer kisses and nudges us for pets...he's come a LONG way!

We recently found a severe irritation, a large lump, under his tongue and fearing the worst we took him to the Vet, (After an internet search I was convinced it was either cancerous or the bite of a rare, exotic, tropical insect) needless to say, the Vet couldn't get a good look at it in the examining room, so we scheduled a teeth cleaning.

He had it done yesterday and we're so happy and relieved to report, the irritation under his tongue was just a place where he snagged his tongue on his teeth and it's well on the way to healing.

Well, that's all that new from our little corner of the world...

We want to take this opportunity to wish you all a happy, safe and prosperous New Year! 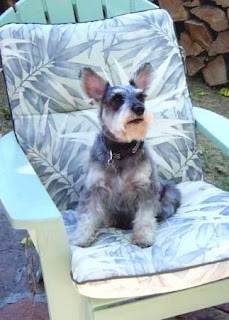