It was an idyllic week. We decided to go camping last Monday to spend the week at one of our favorite campgrounds, the spot where we spent our honeymoon, Burnt Corral on Apache Lake, along the Apache Trail in the Superstition Mountains.
We drove into Globe on Monday to pick up a few last minute supplies. In order to get a jump start on getting our campsite set up, we stopped for lunch at a local eatery instead of preparing food at the campground. We were proud of ourselves for ordering "healthy" salads instead of the usual greasy burger and fries.
Arriving at the campground, we had the place almost to ourselves, and picked a choice spot, close to the lake, close to the rest rooms, close to the fresh water source. The day was clear and cool, the birds were serenading us from the trees surrounding our campsite. We spent the week enjoying ourselves, fishing, relaxing, appreciating the breathtaking scenery of the Superstitions. Pretty boring huh? ...Well, read on....
Now for the truth of the matter. Yep, we went to Globe on Monday, yep, we had our "healthy" lunch of nice salads, however, we didn't count on the food poisoning that followed. Monday evening our stomachs were queasy, by Tuesday, there was no denying it, we had food poisoning, along with all the symptoms I won't go into details describing, suffice to say, we paid homage to the forest service, self-recycling toilets. For those of you have never used one of these modern marvels, imaging plunking your bare butt over a dark, seemingly bottomless pit and feeling a cold wind blowing were no winds should ever reach. There are times you simply must put your trust in Mother Nature to take care of you, this was one of those times. By the next day, we had recovered fairly well, resolving in the future to stick to greasy burgers and fries and leave the so-called "healthy" salads for those more adventurous than us.
Getting our tent set up was no small feat, the wind was whipping without any letup. The birds weren't merely serenading us, they were poking their bird beaks into anything that even resembled food. We quickly learned that we had to put all our food out of reach of prying paws after a kitfox invaded our chocolates and dog biscuits one evening.
We assume Growlph had never been camping before, proven by the fact that after hearing the coyotes howling around our tent at night, he refused to sleep in his own bed, insisting on sleeping smack in the middle of ours' instead. We tried to assure him that the coyotes weren't interested in Schnauzer stew, but being the smart critter he is, he didn't believe a word we said.
Fishing wasn't very good at all. Ralph caught three...well actually, he only caught two because the second bass proved himself to be the dumbest bass in Apache Lake by allowing himself to be caught twice, we could identify him by a small wound on his belly. What are the odds of that happening?
We came home twice to rest up at home during the heat of the day, Burnt Corral is only about 20 minutes from our house, so we had the best of both worlds. All in all, it was a wonderful experience despite the stomach wrenching beginnings. We'll do it again in the near future, this time, sans salads. 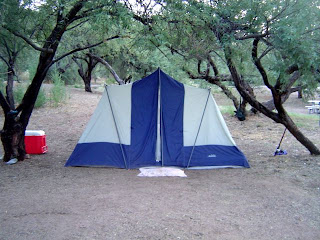 All the comforts of home...well, almost 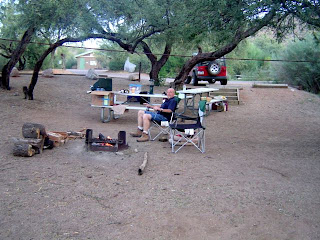 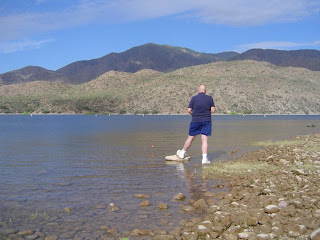 Here's Ralph with the dumbest bass in Apache Lake 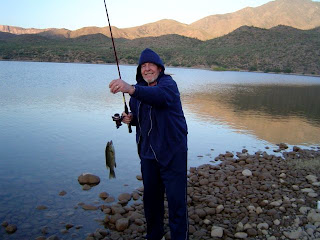 This is the face Growlph makes now if you ask him,
"wanna go camping?" 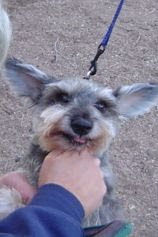 This is the face I make now if you ask me,
"want a salad?" 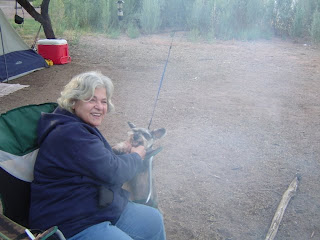 The view from our campsite 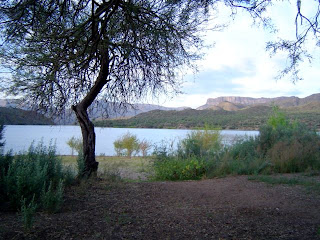 Growlph keeping the birds away 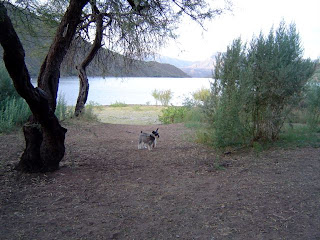 There's no denying the scenic beauty of Apache Lake 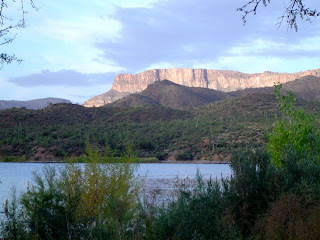 Homage to the "self-recycling" rest rooms,
(whatever THAT means) 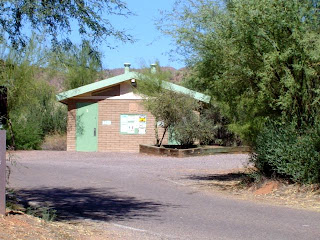