We've finally been getting some monsoon weather, more typical of Arizona this time of year. This morning was so humid, it was more like being in Florida instead of what most people think Arizona is like.
Some new friends of ours' from Casa Grande phoned this morning to see if we'd be interested in a short Jeep run up Workman Creek to Aztec Peak, it sounded like it would be a good escape from the sticky, icky temperatures we're having here at home.
As we climbed to the higher elevations we could feel the temperature dropping and when we arrived at the firetower on Aztec Peak, the towerman reported that the temperature was only 65º, what a super change, we haven't felt a cool temperature like that in a long time. It was overcast with spotty rain at times, the sun stayed in for the entire trip keeping the temperatures pleasantly cool. We've been testing Growlph to see how he'd do riding in the Jeep, taking him on A-Cross Road a few days ago and then up Workman Creek today, we're happy to report he did fine. He was interested in all the new smells and sights and gave no sign of carsickness at all. On the way home, he slept like a baby, not a care in the world. It looks like Growlph is going to fit right in with our lifestyle, he's passed the Jeep test with flying colors.
It's a dog's life, and this one's got it made 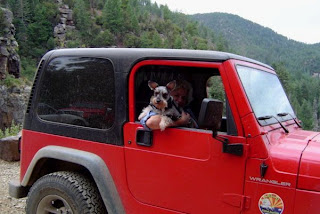 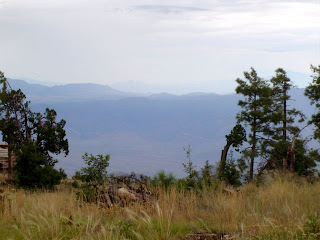 Cloudcover kept the temperatures down 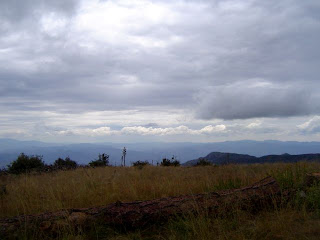 Two red Jeeps are better than one 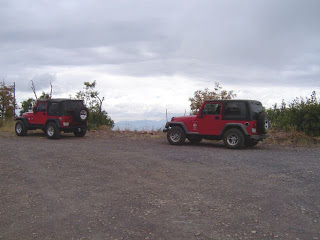 Ralph, Bruce and Judy with Red the towerman on Aztec Peak. 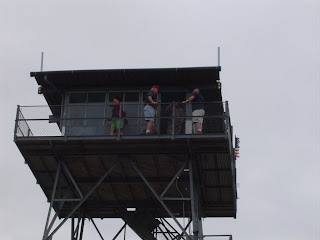