Our curiosity got the best of us, so we set out at 6:30 this morning to take a closer look at the mill we spotted along Reynolds Creek yesterday. Larry & Jean decided to follow a hiking trail leading off into the mountains while we crawled around the old mill ruins. From what we've been able to find after doing some brief research, the mill operated from the late 1800s on and off until the mid 1940s. We were correct in our speculations yesterday, after examining the extensive mine tailings, we were able to determine that Asbestos from the areas vast mining operations was being processed there. Huge mounds of Asbestos tailings were piled alongside Reynolds Creek.
Larry & Jean returned telling us about a wonderful oasis complete with a waterfall that they located about a mile up the trail. They also reported that there were several more mines in that general vicinity. We'll head back there during the Winter months to check it out, once the temperatures are more bearable and the snakes are sound asleep.
We spotted three King Snakes near the creek, they were living under an old tree root. I suppose as far as snakes go, these guys were particularly pretty ones, wearing very vivid colors. They're shy, non venomous snakes, who preferred to crawl back into their tree root that to stick around watching us.


Asbestos tailings mounded along the creek 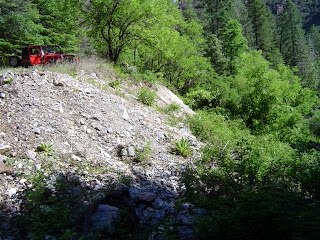 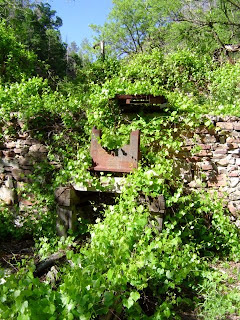 According to the NY Times, the foundry
that made these mill parts burned to the
ground January 1, 1900 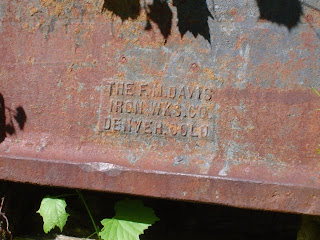 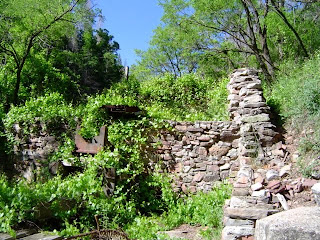 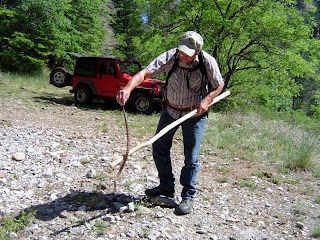 One King Snake, there were two more under the log. 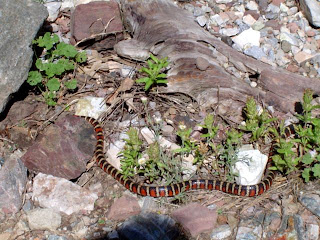