Nice trip! We finally got some good directions to PB Cabin up on Cherry Creek Road, below Board Tree Saddle. It's a scenic, rustic place, first built by a pair of partners, Pendleton & Barkley who were running about 200 head of cattle back in 1898, after that time it was used by miners prospecting the local area. A newer cabin was erected in the 1950s. The "newer" cabin is still used today by wranglers, ranchers, forest rangers, along with hunters, hikers and campers. It's on a first come basis, honor system, if you use food or supplies, you're supposed to replace them. Judging by the numerous supplies, more people have left things than taken them.
It's such a peaceful location, sitting alongside PB Creek surrounded by ancient Cottonwoods and Sycamores.
It was cold and breezy in the mountains this morning, there's a chance of snow perhaps beginning tomorrow, so we're glad we went before the snow begins to fly. I'm sure we'll return in the future, perhaps someday we'll load up our sleeping bags and make a night of it. I can imagine falling asleep listening to the burbling brook as coyotes howl in the distance.
Ahhh nice! 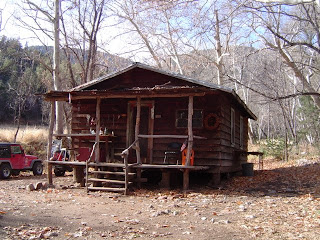 Ralph with his "come hither" smile 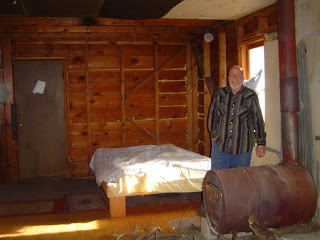 The original cabin, hand-hewn, built in 1898 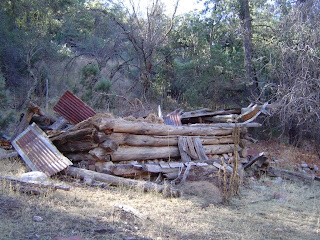 Ralph & Larry (looks like a scene out of "Deliverance"
Hmmm is that "dueling banjos" I hear? 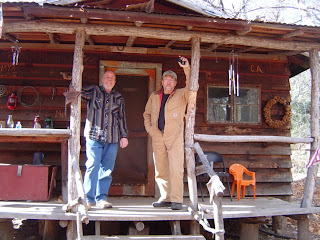 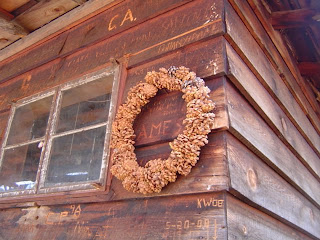